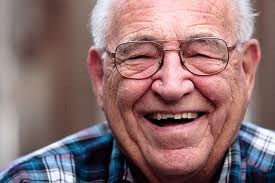 John's grandparents have been attending Kindermusik classes with us since John was a baby. I used to think John's grandma, Carolee, loved class more than any other human being, including all of the kids. Carolee is a former preschool teacher, and when John was a baby, she would spend the whole time laughing heartily at his antics and the antics of the other children around him. I knew from the moment I met her that Carolee was some sort of Kindermusik angel sent to watch over us and make sure we squeezed every bit of joy we could get out of each and every class.

It wasn't until about four or five semesters in, though, that I realized that John's grandpa might actually be having a better time in class than either John or Carolee. John's grandpa loves to sing. John's grandpa can sing almost as high as I can, and he does, at every opportunity. Today in class, John's grandpa tried to sing along with a piggyback song that I was making up as I went along to the tune of Queen's "We Will Rock You". After that, he was rolling around on the ground with two little boys. Obviously, one was not John; let's call him Jack. John's aunt (yes, John comes with a full entourage) whispered, "Dad! Stop tickling that little boy! That's not John!" Jack's mother pulled me aside and laughed. "She's new," she said. "She doesn't realize that he always plays with Jack. Jack loves him!"

Indeed, when John's Grandpa comes to class, he is everybody's grandpa. He comes to class with the spirit of a very outgoing little kid. He rolls around on the floor, makes up harmonies to songs he's never heard before, and gets everyone riled up with his fun-loving personality. I joke that he's the one in the family who's my student. To tell the truth, though, he and Carolee and Jack's mom and all the other fantastic parents in that class are the best possible "Kindermusik Grownups" -- they come for the fun, stay in the moment, sing like they're the stars of the show, and aren't afraid to marvel in -- and even emulate -- the wonder that is the two-year-old child.

"Miss" Lindsay is the Director of Kindermusik with Miss Lindsay & Friends. For more information on our holistic approach to teaching music to babies, toddlers, and preschoolers, please visit www.eastbaykindermusik.com.
Posted by Unknown at 10:16 PM